'Choices just bring you to the place you should be'.
I guess you could say that I was torn between the weekly Capitol Records executive corporate check and going out with Mike Lang to find our Woodstock future. I was under contract, and starting another business or company was corporate suicide. Did I want to learn & grow or am I becoming too comfortable? Of course the answer was right in front of me all the time. The real story as I remember it was also something of a magical journey. Too much info for this site. This site should be a trip for you reliving the joy of the concert. I will tell all in my new book.

Bert Sommer (signed by me at Capitol) had a good friend named Victor Kahn who was a NY graphic artist for London Records and The Rolling Stones and was at that time doing their packaging on the 'Let it Bleed' album. I hired him as my first Art Director and put this "not quite a business" together with Michael called Kornfeld Lang Adventures. It wasn't a legal corporation, or a registered company, but now we had an image on paper... something that I thought we needed to get serious financing and our Woodstock fantasy started. The design was a pure white embossed dove with a patriotic red, white & blue typeface. Clearly what would later evolve and become the now famous dove on the guitar logo of the original Woodstock festival. 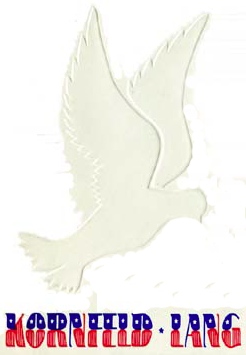 One day Miles Lourie who was Michael's lawyer for 'Train' called us and said he knew of these two fellows who were putting up a studio called Media Sound in a church on 57th street and were very wealthy investment bankers. He said one of their fathers owned Block Pharmaceutical and the other father had dental clinics. Miles asked, "Should I set a meeting up with the four of you? They might be interested in your project because they have unlimited capital". It was rumored that John Roberts and Joel Rosenman put an ad in the New York Times that said "two guys with unlimited capital looking for investments". Michael and I never saw that ad.

It was set up for John, Joel, Michael and I to meet. Michael was very quiet through the meeting, sitting there with his usual smile and vibe. I did all the talking. As John & Joel would later describe in their book, "Michael was dressed in the current mode and Artie had hair that came a little too far over his lapels", which they thought was a little too long for my suit! I guess the combination of Michael's mystique and my sales pitch convinced these guys to put up $250,000 for this project. Within a couple of days they called and said "Let's have a meeting with the lawyers to put this on the road". Woodstock Ventures was legally formed and each of us were partners. I sort of felt like the guy on the outside because when stock was issued in a four way partnership, my stock was held in Michael's hands since I was still an executive at Capitol Records and my contract forbid me from owning stock in any other entertainment business. The time to leave Capitol Records had finally arrived and the corporate suits were retired to mothballs!

When it came time for offices Michael insisted that he have an office downtown separate from our promotional office which also housed John & Joel. It was from our new Woodstock Ventures offices on 57th Street I did all the promotional work from and hired the six people who would become the promotional team for the Festival. My staff consisted of Mel Lawrence, Jane Friedman of Wartoke Public Relations, Danny Goldberg who went on to be a major executive at numerous record companies, Dick Gersh who was well known in the music industry, Paul Marshall who was my personal attorney and Burt Cohen & Mike Foreman from Philadelphia would do all the media buying I planned. Did I mention Chris from the Fillmore for advance ticket sales?

Michael had his own offices and hired some of the best people money could buy. It amazes me now, looking back, to realize what a huge staff Michael had on the production side. Chip Monck, who had done lighting on almost every major tour was hired. Monck's was that calming voice you hear throughout the concert, record & movie that eventually became the "Voice of Woodstock". Bill Hanley who had done the sound on basically every major tour for every major artist was hired. Along with Wavy Gravy from the Hog Farm, this culminated in a backstage staff of about 3,000 strong that weekend in August.

We had to come up with a poster and Michael, being very much into the Age of Aquarius, said he had someone to create a poster which, fortunately, I had nothing to do with, since this first attempt said nothing. Then Michael or I, or whoever, got the connection with artist Arnold Skolnik. When Arnold showed up with his now famous poster of the guitar and dove and the words we had created, we all knew that was it! 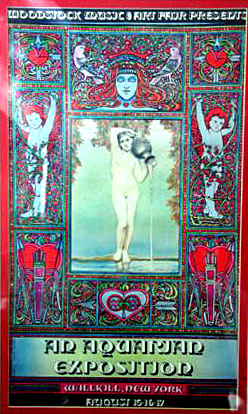 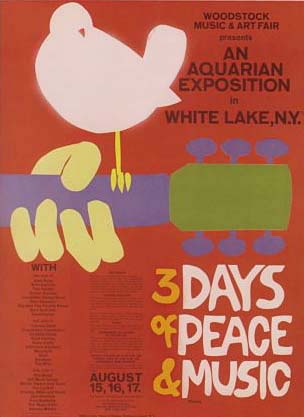 We had included the words "Music and Art Fair" because our intentions were always to make this more than just a concert, but a total showing of our generation. We wanted to include Arts & Crafts, Yoga and Spiritual directions ...and what was to us, the whole Woodstock Nation.